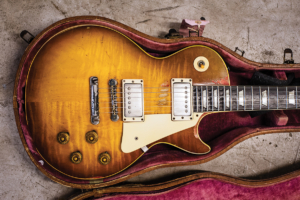 Vintage Guitars as an investment

Vintage guitars are “a favourite of millions,” he told them, and guitars don’t have to be really old to be valuable. “It doesn’t have to be something that’s 50 years old these days… Don’t turn your back on it just because it’s new.”

First, what are vintage guitars?

According to Money Under 30, vintage guitars are made in the 80s or earlier. The most valuable guitars are:

A vintage guitar doesn’t have to be in mint condition to be valuable. In fact, some people pay extra to make new guitars look older than they are. Go figure.

Investing in vintage guitars, or collectables in general, is a pretty risky move if you are not a musician or a guitar enthusiast, and Dey Capital co founder, Hichem, is precisely an accomplished guitar player and instruments specialist.

Depending on the model and its condition, some guitars have appreciated 1000 percent. For example, only a few thousand Gibson Les Paul models were made in the 1950s, selling for several hundred dollars at the time. 1959 Les Paul standards in good condition have been known to fetch between $200,000 and $500,000.

But plenty of investments have paid off lately, as baby boomers become collectors. Though guitars originally worth $200 selling for $200,000 or more is rare, it happens frequently enough to make one want to get a slice of the pie. Kevin Drost of online instrument sales site Reverb.com tells South China Morning Post that at least one of these high-rolling transactions happens on their site every month.

If you’re passionate about guitars and you want to know everything there is to know about them and the market, investing in guitars might be a good idea.

We don’t think anyone could have predicted that a Les Paul from 1959 would be worth hundreds of thousands of dollars today.  And let’s say it … buying guitars is a lot more fun than buying bonds don’t you think ?

A guitar’s value is highly subjective. As in fine art, unless you’re an expert, it’d be hard to spot good investment pieces, so please trust our knowledge in this asset class and let us help you build your collection.